John Kiltinen, born in Marquette in 1942, was a mathematics professor at Northern Michigan University from 1971 to 2007. Dr. Kiltinen was involved with the Summer Institute for the Arts and Sciences, the Visiting Science Lecturer Program, Sigma Xi lecturer series, and the development of the Seaborg Center. He was the Director of the Seaborg Summer Science Academy. He also participated in the development and operation of the Michigan Mathematics Placement Exam Program and was involved with the Michigan Mathematics Prize Competition. Dr. Kiltinen became President of the NMU Chapter of the American Association of University Professors (AAUP) in the early 1980s and led the Union through NMU's Declaration of Financial Exigency in 1982. He was also active in both the Finnish Council of America and served the NMU Finn Club as founder and advisor. After his retirement in 2007, Dr. Kiltinen established the "Kiltinen Mathematics and Computer Science Idea Endowment."

The only item from the collection that has been digitized is a transcript of an oral history interview with Kiltinen. The full physical collection includes photographs, financial reports, correspondence, event programs and schedules, meeting minutes, math placement scores, problem sets, Seaborg Summer Academy participant personal information, and evaluations. The items included document the activities of the AAUP, the Summer Institute for the Arts and Sciences, Seaborg Summer Science Academy, Visiting Lecturer Series Program, and Math Department Records. The collection also includes published works of Dr. Kiltinen. 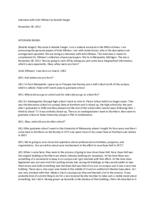