The Ontonagon County Poor House was established in 1855. Its inmates included people with physical and mental disabilities as well as chronic illnesses such as tuberculosis. The Poor House closed in 1946, and the residents were transferred to a facility in Gibb City, Michigan. This collection consists of a ledger that documents demographic information about the inmates of the Ontonagon Poor House. The inmates section of the ledger includes the name of each inmate and their age, sex, residence, nationality, entrance and discharge dates, cause of pauperism, reason for discharge, whether they had a disability, and "other remarks" that often include date and place of birth, religion, and where members of the person's family lived. The deaths section describes the name, race, sex, nationality, and date and cause of death of each person who died at the poor house. The inmates appear to have come from all over the Upper Peninsula, and their poverty is usually described as being due to physical or mental illness. 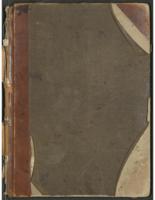